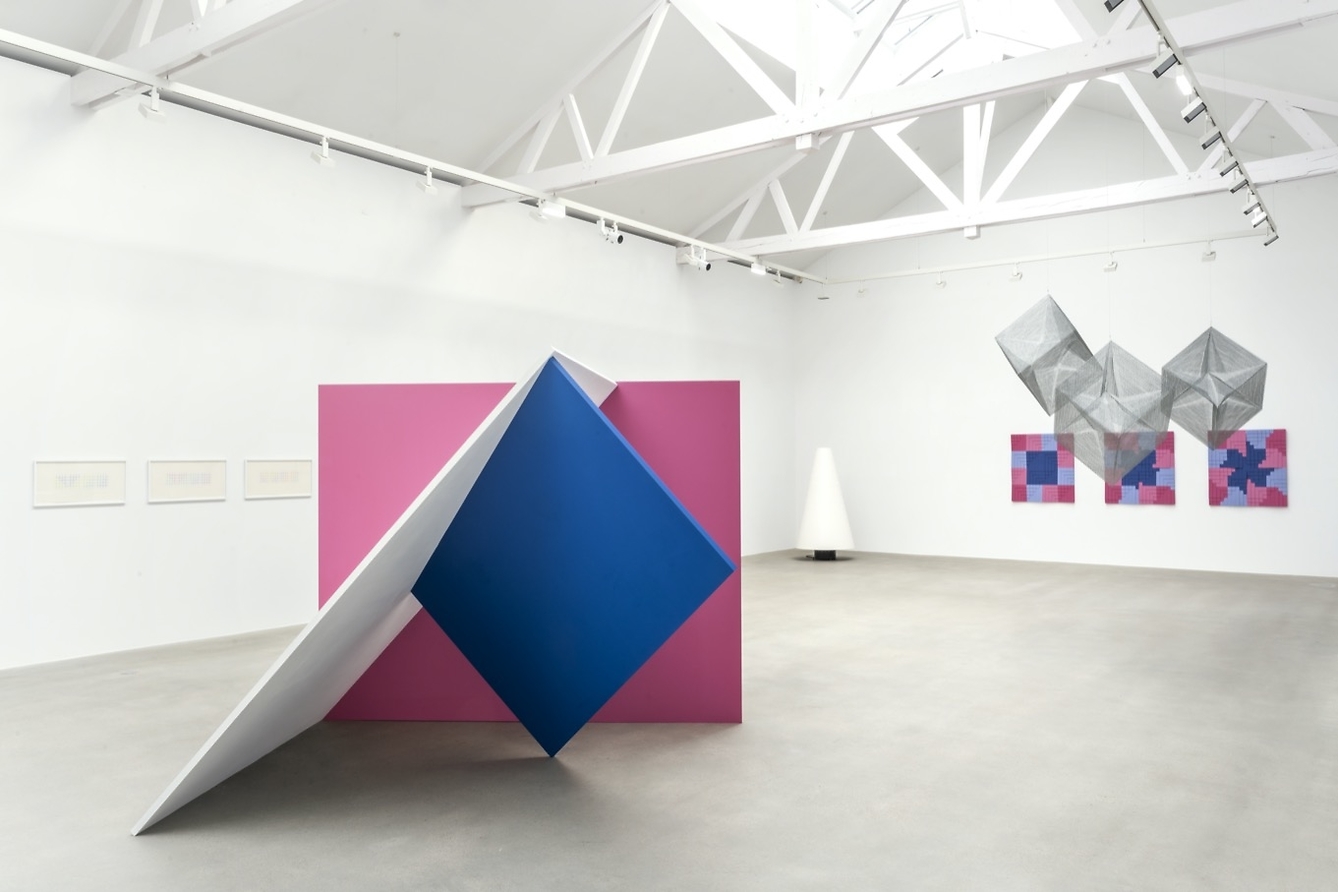 This exhibition brings together fourteen pioneering women artists from Europe and the Americas, who each contributed in their original and uncompromising way to expanding the scope of the minimal aesthetics beyond the orthodox category of Minimal Art. Through a large selection of sculptures, installations, paintings and works on paper dating from the 1920s to the early 1980s, Dimensions of Reality: Female Minimal explores new perspectives and genealogies in the field of geometric abstraction, highlighting the complex and often subtle relationships between formalism and identity politics. 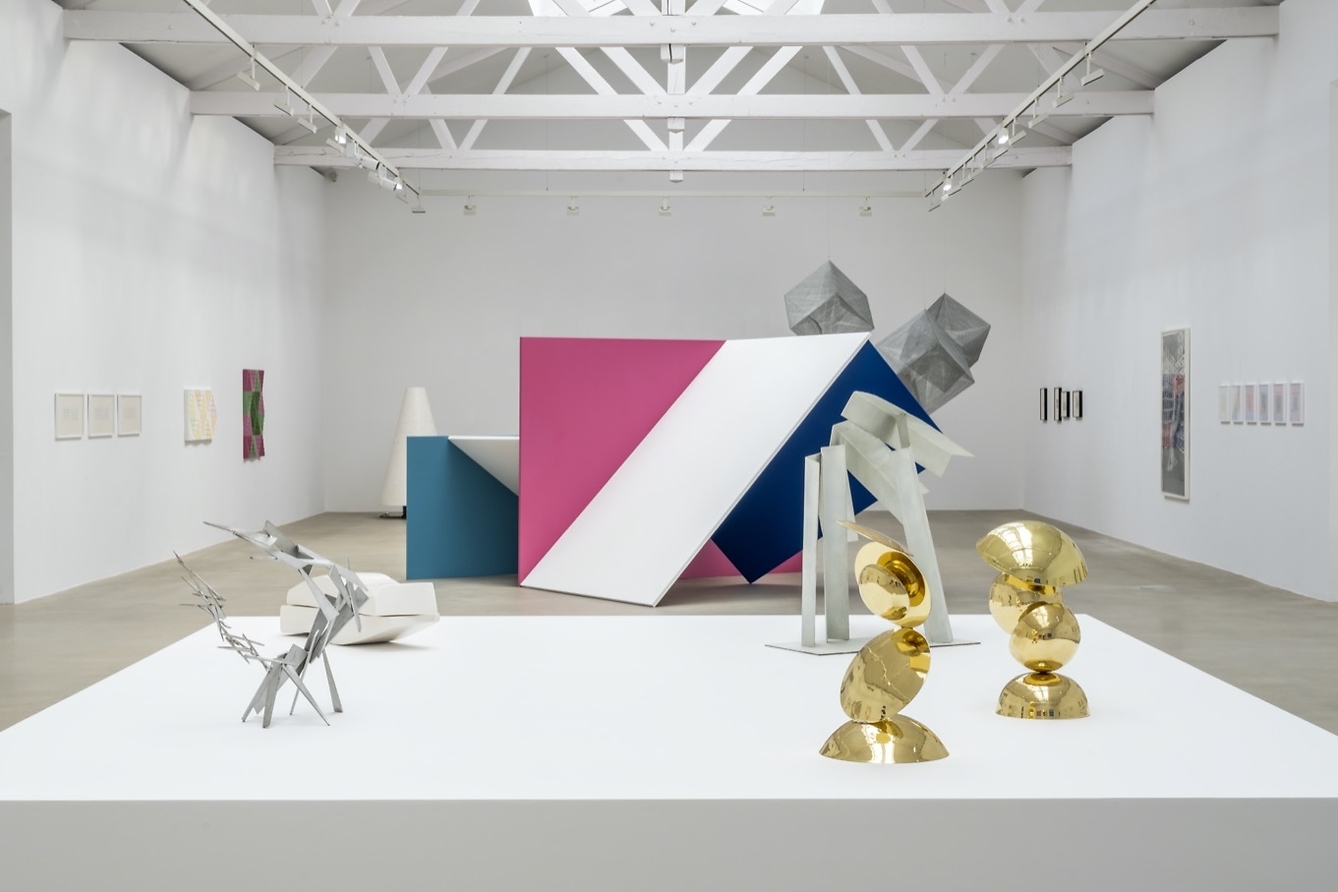 The artists in the show have been central to period-defining artists' groups such as Zurich Concrete in Switzerland, Abstraction-Création in Paris and Los Diez Pintores Concretos in Cuba, and have co-founded some of the most experimental artistic platforms of their time, such as A.I.R Gallery in New York and the Biennial of Spatial Forms in Poland. However, most of them have long been overlooked and their role is only now receiving greater recognition.

Abstract experimentations of the 1960s, 1970s and early 1980s form the core of the exhibition. Beyond the plurality of cultural and geographical contexts within which each of these artists evolved — which partly explain the variety of forms gathered here — these artists are united by their emancipatory desire to expand and disrupt the canon being forged by a male-dominated minimal vocabulary.

Reconstrusted especially for the exhibition, a monumental wall painting by Japanese-Brazilian artist Lydia Okumura (b.1948, São Paulo; lives and works in New York), first realised in Colombia for the Medellin Biennial in 1981, will distort and reconfigure the surrounding space. Presented for the first time since 1978, Forest of Threes, a large installation by Rosemarie Castoro (1939 – 2015, New York) connects dance with an abstract forest. Shown for the first time in France, the work of Shizuko Yoshikawa (1934, Omūta, Japan – 2019, Zurich) is the result of a unique fusion between Swiss Concretism and Japanese Zen principles. A selection of metal sculptures by Polish pioneer Magdalena Więcek (1924, Katowice, Poland – 2008, Egypt) demonstrates her crucial role in the history of Eastern European neo avant-garde, initiating collaborations with factory workers. Also working with metal, Feliza Bursztyn (1933, Bogota – 1982, Paris) was part of a generation of Latin American artists that infused formalist sculpture experimentation with political underpinning. 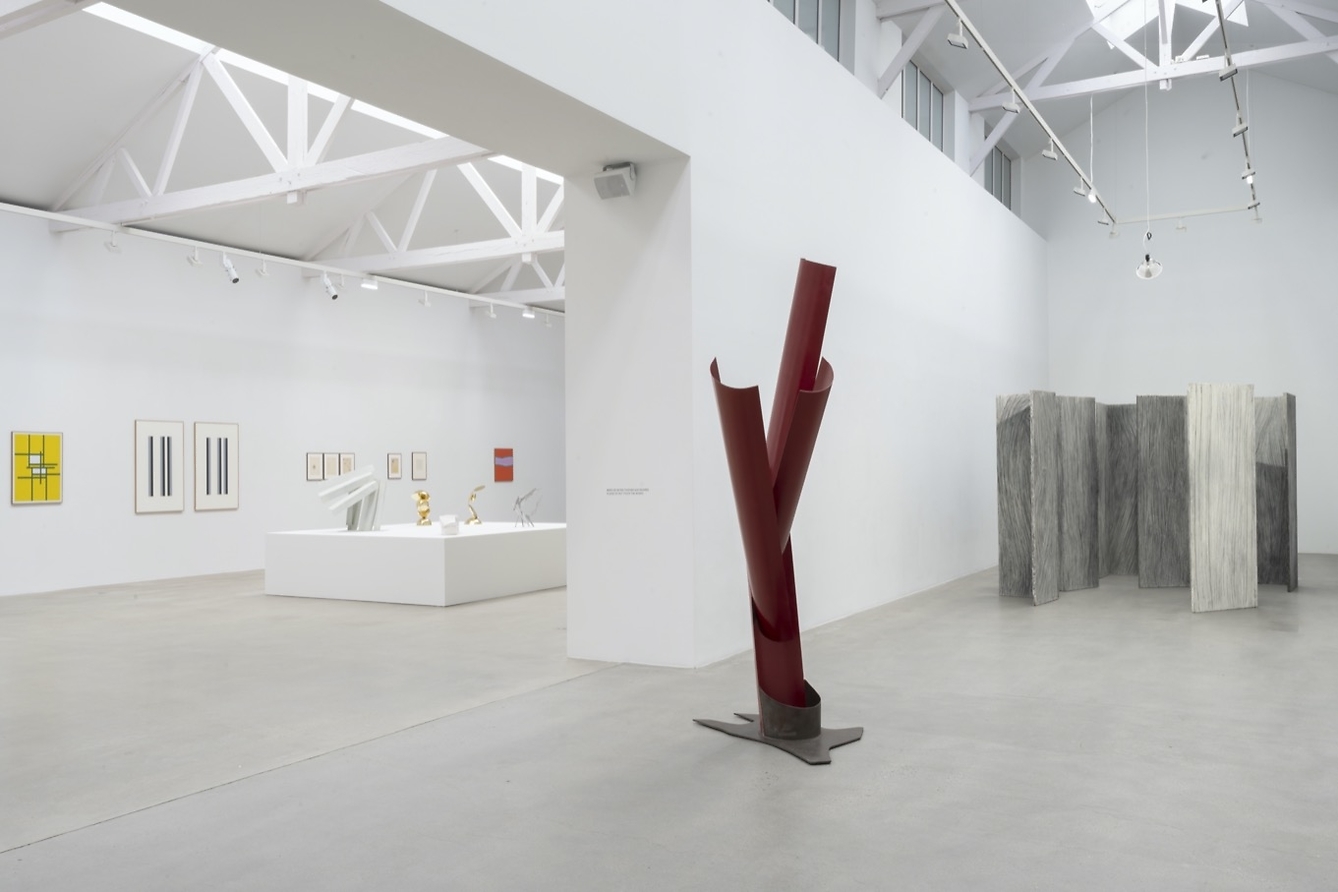 Represented by a large outdoor installation and early sculptures from the late 1960s, the work of Mary Miss (b. 1944, New York; lives and works in New York) was at the center of the critical reception of Minimal Art although she became later known for her postmodern urban structures and environments. The radical work of Vera Molnar (b. 1924, Budapest; lives and works in Paris) demonstrates her creativity within a predetermined system of rules, establishing fertile ground for further intersections between art and technology. One of the four co-founders of the Zurich Concrete group, Verena Loewensberg (1912 – 1986, Zurich) deliberately incorporated irregular shapes that challenged the balance of her painted compositions.

In the same spirit, but a different way, Kazuko Miyamoto (b. 1942, Tokyo; lives and works in New York) introduced an element of imprecision to the minimal grid.Isolating herself from the dominant artistic movements of her time, Sardinian artist Maria Lai (1919 – 2013, Sardinia) combined the vernacular technique of weaving with constructivist elements, deeply engaging with her immediate community. Similarly, Lolo Soldevilla (1901 – 1971, Havana) pursued visual innovations in the Cuban 1950s Concretist movement while maintaining politically engaged writing activities. Liliane Lijn (b. 1939, New York; lives and works in London) pioneered Kinetic Art and Concrete poetry in the 1960s by introducing elements of texts and numeric systems into abstract rotating sculptures. 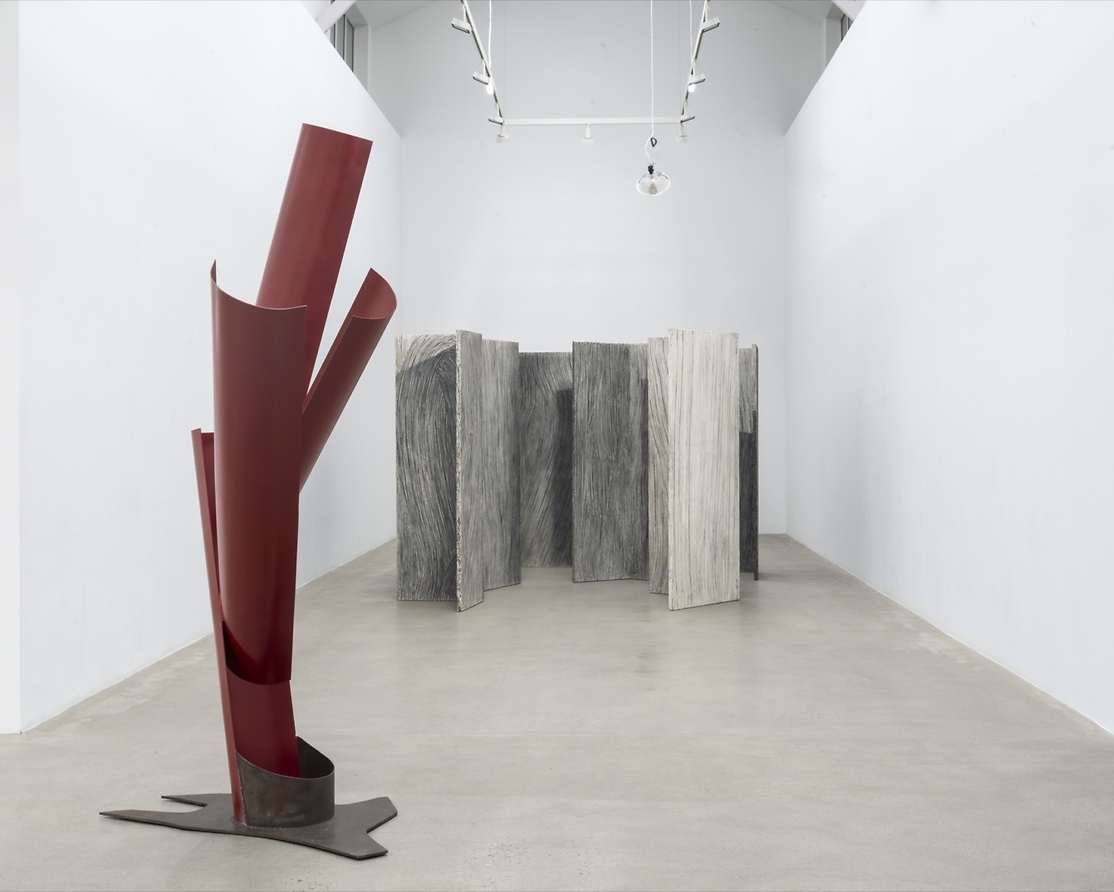 These artists were preceded by numerous groundbreaking female figures of the pre-war avant-garde movements, from Bauhaus to Neo-Plasticism, which have predominantly been documented through the accomplishments of male masters. The seminal Bauhaus photographer Lucia Moholy(1894, Prague – 1989, Zurich) exemplifies the ways in which the contributions of female forerunners were overlooked or even co-opted. The famed school’s outstanding documentarist, Moholy fought to regain  the rights to her oeuvre for decades after Walter Gropius took her negatives to the US in the 1930s as part of the anonymous Bauhaus archive. British artist Marlow Moss(1889, Kilburn, UK – 1958, Penzance, UK) has played a central role in the development of Neo-Plasticism. Based on a detailed mathematical theory, she introduced in her rigorous compositions the “double line”, a dynamizing feature that has been later adopted by Piet Mondrian without crediting her. Her legacy has been further diminished by the almost complete destruction of her work from the 1930s during World War II when she was forced to escape Nazi occupation in France. 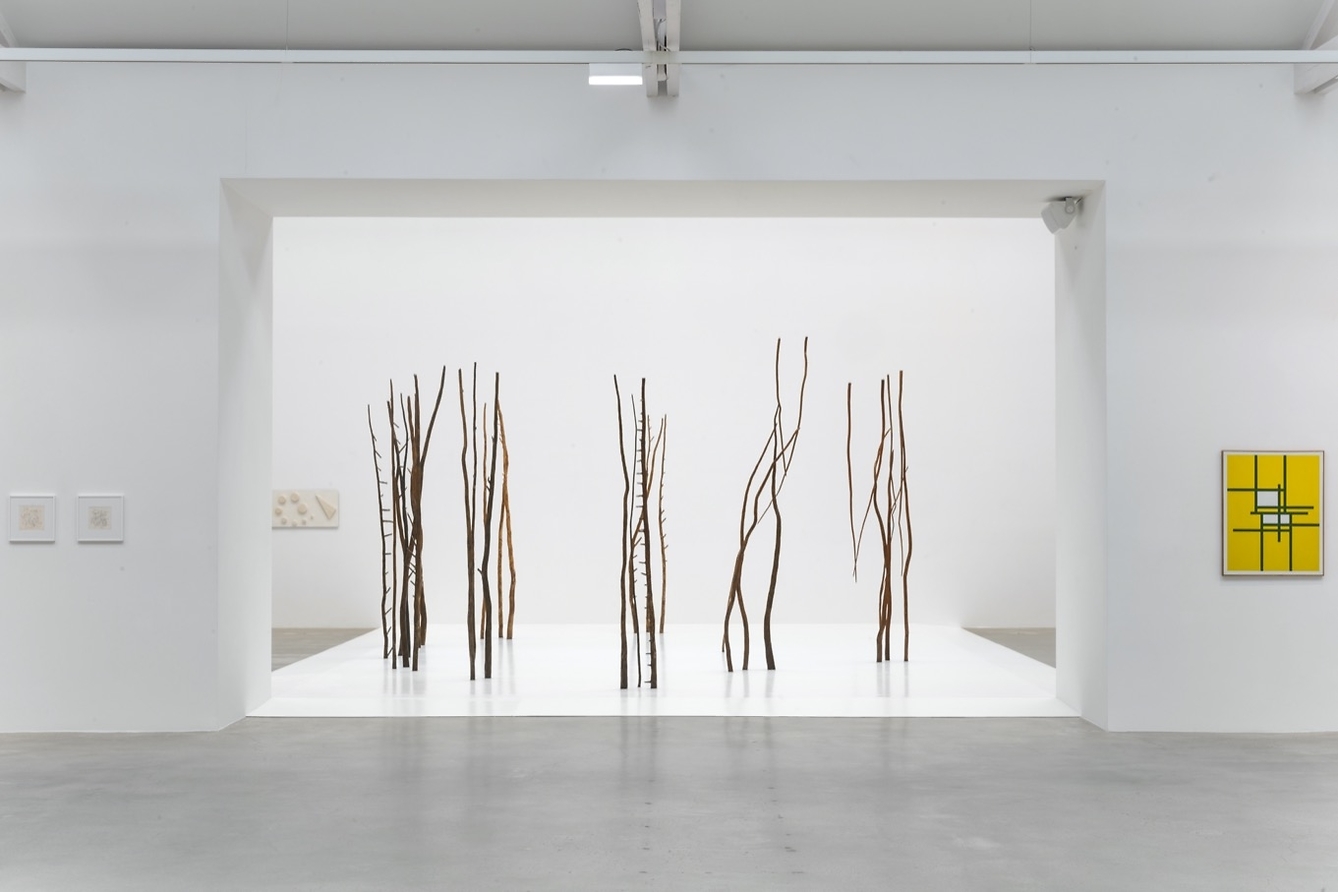 Gender and sexuality — though often seemingly external to the abstract aesthetic — had numerous real-life manifestations for the exhibited artists, who at times brought a feminist perspective into their works. Feliza Bursztyn, who studied at the Académie de la Grande Chaumière,  Paris, with Ossip Zadkine in the 1950s, invested Kinetic Art with oppositional feminist and leftist agendas, fighting against oppressive social and political conditions in Colombia. Rosemarie Castoro was part of New York’s legendary Art Workers’ Coalition in 1969, and one of the eight women interviewed in Linda Nochlin’s 1 groundbreaking 1971 essay, ‘Why Have There Been No Great Women Artists?’ Kazuko Miyamoto, Sol Lewitt’s first assistant, co-founded A.I.R. (Artist in Residence) in 1972, the first all-female collective art gallery in New York. Eschewing traditionally feminine attributes, Marlow Moss changed her forename from Marjorie and adopted a dandified masculine appearance around 1919.

The ‘emancipatory’ aspect of minimalism is furthered in this exhibition through the recognition of new geographies when mapping Minimal Art, which has traditionally been understood as a movement predominantly associated with the United States. This exhibition will look beyond this paradigm to examine Eastern European and Latin American practices, and the oppositional stances these artists took within their specific socio-political milieus. The personal trajectories of the artists presented demonstrate how stories of migration and dynamics of international exchange have been a consistent driver of innovation and creativity.