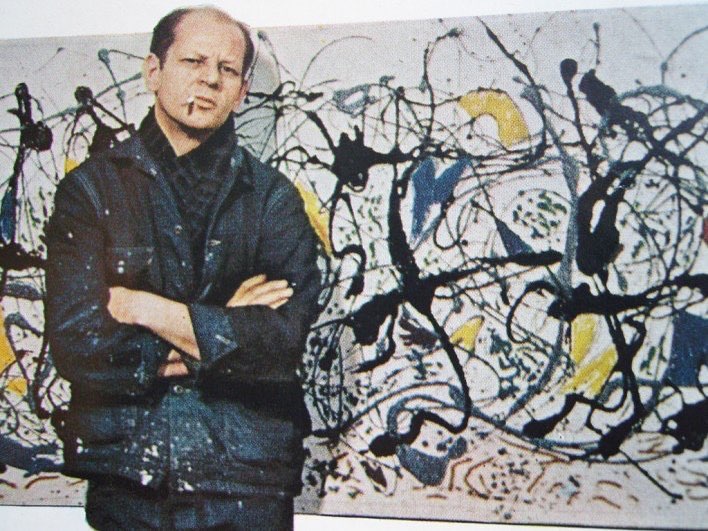 Jackson Pollock in front of ‘Summertime: Number 9A’ for LIFE magazine, 1949

Yesterday was the birthday of American artist and drip paint extraordinaire, Paul Jackson Pollock. The abstract expressionist painter was born on January 28, 1912 in Cody, Wyoming.

Influenced by Native American art in his early life, and certain aspects of Surrealism and Modernism later, Pollock produced his “action painting” with the canvas set on the floor, allowing the paint to drip from a stick or directly from the paint can, and later adding depth by using a trowel or a knife. The abstract paintings of the American artist Jackson Pollock are among the highest achievements of 20th-century art.

Throughout his career, Pollock challenged the Western conception of brush-and-easel art making, choosing instead to use his whole body in a unique form of action painting. Pollock began to gain a reputation at the beginning of the 1940s. His meeting with Peggy Guggenheim was obviously an accelerator. She commissioned him a canvas whose dimensions (240x600) heralded the artist's future large formats. Pollock’s abstracted “action paintings” technique allowed him the freedom to move around all 4 sides of the painting.

Sadly, the great artist painted his last work in 1955, nearly one year before he passed away in a tragic car accident at the age of 44. Also, Jackson Pollock struggled with alcoholism throughout his life.

Jackson Pollock had a reputation for questioning traditional boundaries, and his life struggles generated almost as much fascination as his work. Going beyond the limits of the medium, such is the undeniable attribution of Jackson Pollock (1912-1956), father of abstract expressionism, pope of the unconventional, and progenitor of “all-overs”. “Painting is self-discovery. Every good artist paints what he is,” Jackson Pollock once said.

(The Museum of Contemporary Art, Los Angeles, the Rita and Taft Schreiber Collection,