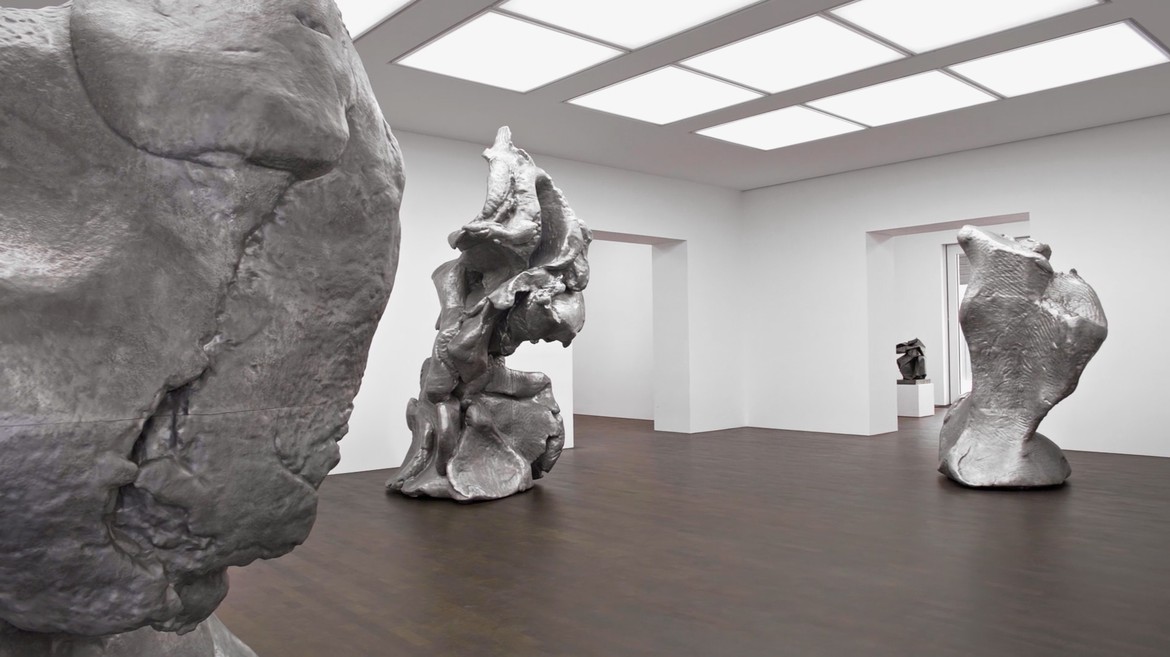 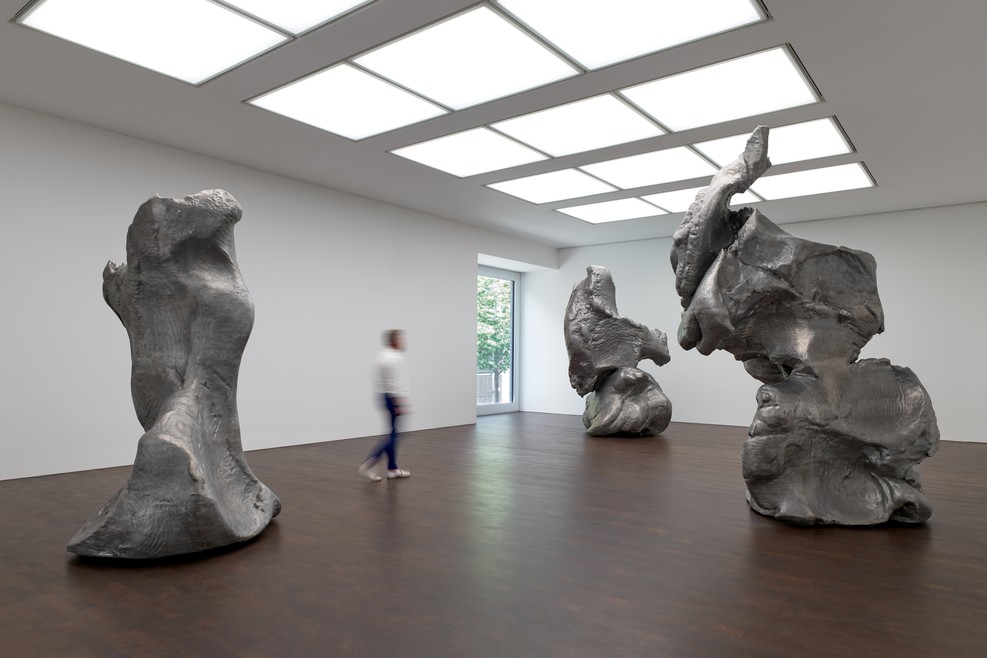 Chamberlain, who died in 2011, made sculptures out of used automotive parts and other premanufactured metal components, expanding the rhythmic impulses of Abstract expressionist painting into three dimensions. In his works, these forms retain the aura of their industrial origins while simultaneously conveying a baroque mannerism. In the late 1960s, Chamberlain began using galvanized steel boxes to create “crushed” sculptures such as Untitled (1967), which juxtaposes pliant curves and sharp angles in an interplay of shadow, contour, and space. 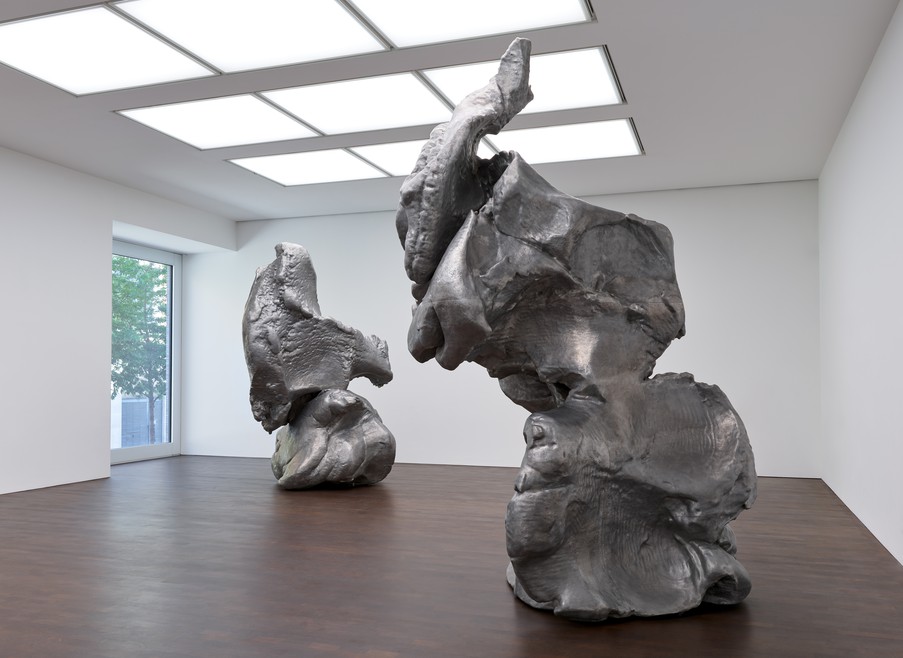 Fischer challenges the material and conceptual limits of the many mediums he works with, exploring questions of physicality, perception, and permanence. Between 2006 and 2008, he made a series of large sculptures by modeling fist-sized lumps of clay into amorphous solids, digitally scanning them in order to produce molds at approximately fifty times their original size, and casting the results in aluminum. Lustrous, textural, and organic in appearance, Fischer’s abstract forms fill the gallery space from floor to ceiling and preserve the contours of the artist’s grip and fingerprints on a giant scale. 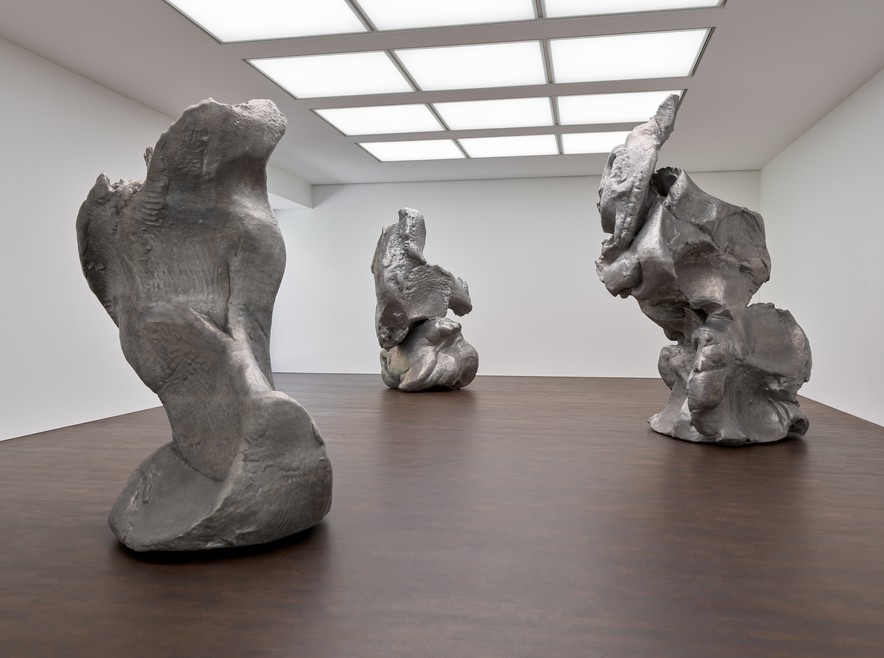 Filtering modern conceptions of image culture and the readymade through a classical emphasis on the figure, Ray produces precise and uncanny renditions of familiar objects and human forms. These works investigate what happens when the mundane is remade in a surprising material, or at an unexpected scale or density. For Tractor (2003–04), he took apart a rusting 1938 farming vehicle, cast each of its original components by hand in aluminum, and reassembled the machine in its newly pristine entirety. The resulting sculpture is a product of Ray’s meticulous and meditative conceptual process—a method that both memorializes and reinvigorates the visual vocabulary of everyday life.

Chamberlain’s, Fischer’s, and Ray’s works will be presented in separate rooms, allowing for a focused examination of individual approach and identity—and affirming each artist’s status as a pioneer of sculptural technique and affect.